Halal tourism or halal travel has become more and more familiar. This is a subcategory of tourism which focuses more to accommodate Muslim families who abide by the rules of Islam. The number of Muslim tourists and travellers has increased which makes many countries try to attract them by providing halal tourism program.

Travelling is for everyone including Muslims. However, traveling isn’t always easy for Muslims since they need to consider the food, prayer, as well as activities which won’t them break the rules of Islam.

For example, pork is not included into halal food for Muslims. Therefore, they cannot just eat carelessly without knowing whether or not the meals they order contain pork. Muslims also have their prayer time. Thus, they will need a place which can accommodate their need to prayer such as mosque. It is predicted that the number of Muslim travel will keep increasing in the next four years. 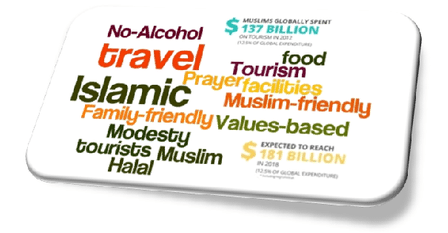 When it comes to halal tourism, it means alcohol free environment. Started from the hotel to the flight, halal tourism won’t have alcohol in any aspect. For your information, Turkey is the first country that provides halal hotels for Muslims.

This type of halal tourism program doesn’t always exist even in Muslim country so this is something special needed by Muslim travellers. In halal tourism, hotel and beaches are usually separated.

Muslims play big role in the economy of a country. That is why the program of halal tourism isn’t always provided by Muslim countries like United Arab Emirates, Turkey, and Malaysia but also Muslim-minority countries such as Japan and South Korea. There are travel destinations in Europe which also provide halal tourism such as London, Spain and Bosnia.

Halal airline provides halal foods which alcohol, and pork free. They also provide prayer calls, Qur’an in seat pockets as well as separate section for male and female travellers. This makes Muslims travel easier since what they need is provided following the rules in Islam.

Aside from the airlines, halal tourism also include hotel providing halal foods in which the meat comes from animal slaughtered in accordance with the teachings in Islamic Sharia. The foods are also free from any substance forbidden by Islam such as alcohol and pork.

The staffs of the hotels are also trained to give service and treat Muslims guests in certain way which won’t violate Islamic sharia. Thus, Muslim guests will be more comfortable while staying in the hotels. Other characteristic of halal tourism includes facilities such as providing swimming pool separating male and female area.

For your information, there is Muslim travel standard as reference tool dedicated to Muslim travellers. the standard is divided into a rating scale form one to seven. Those rating scales are made based on the amenities and services. Those include the availability of qibla direction, alcohol policies, prayer carpets, as well as halal-certified food.

With the hype of halal tourism program, Muslims all around the world have more chances to enjoy their travel comfortably.