While Spring might be the high time to visit Japan for its famous cherry blossoms, autumn in Japan is just as gorgeous. Japan is definitely not short of viewing spots. Tokyo in itself boasts quite a number of parks and even mountains in the surrounding area in Kanto region for autumn leaves hunting. The activity itself—hunting for autumn colors—is referred to as “momigari”. People go out of their dwellings in search for fall beauty. 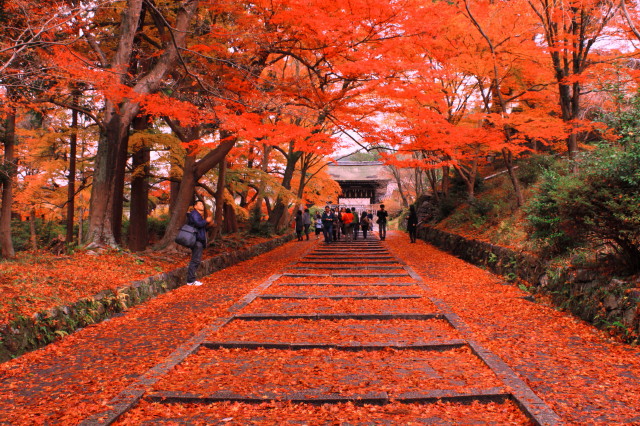 In Japanese, autumn color is known as “koyo”. The word refers to a phenomenon of the changing of the leaves into autumn colors. The kanji that constitutes “koyo” literally mean “red leaves”, but the word itself refers to the shades of autumn, which includes yellow, oranges, browns, and combinations of those shades. The clean, organized streets in Japan look even more stunning during fall as the autumn colors are spread throughout.

The viewing period of autumn colors last from two weeks up until a month. While it might not be as crowded and packed as hanami during sakura season, you can spot a lot of people going out and about in the parks, basking in the atmosphere. Viewing autumn leaves in Japan is often enjoyed with traditional Japanese cakes shaped like maple leaves. These traditional cakes are often eaten with Japanese traditional tea, “ocha”. This popular autumn snack is Momiji Manju, in which “momiji” means maple leaves, a pastry made out of mochi dough, generally filled with Azuki paste (red bean paste). The Momiji Manju is known to be a variation from the Miyajima island.

Autumn season begins in September in Japan, as it begins earliest in Hokkaido; the Northern parts of Japan. The mountainous areas are also experiencing the earliest autumn in Japan compared to other areas. Generally, the colder the climate and the weather, the quicker it is for autumn colors to appear and spread. Autumn then would spread to the Southern parts gradually. The Kanto region which includes Tokyo and Kyoto sees autumn colors during late October – early December.

When it comes to finding the spots to see autumn colors, it depends largely on where you plan to travel. If you plan to visit the capital, Tokyo has Rikugien Park as well as the Koshikawa Korakuen. Both parks are very popular for autumn leaves viewings and you’d easily find people everyday visiting the parks. The Koshikawa Korakuen and the Rikugien Parks are both a sight worth seeing during your travel to Japan, as both parks are traditional Japanese landscape gardens. With the ponds and artistic layouts, simply strolling the park during any season is a pleasure a lot of locals often indulge in, even during winters. If you go to Kyoto, there is Arashiyama Park, which also houses the Arashiyama temple, where you can visit and give some offerings to. If you travel a bit up North, in the Tohoku region, there’s Mount Nasudake in Fukushima Prefecture. Mount Nasudake also has a hot spring (Onsen, in Japanese) known as Nasu Yumoto Onsen.