Once you set your heart to diving holiday in Bali, you will, almost instantly, hear the names of Mola Mola. The name may sound nice and strange to you first, and suddenly you have a bunch of diving school across the island offering an experience of diving with Mola Mola. 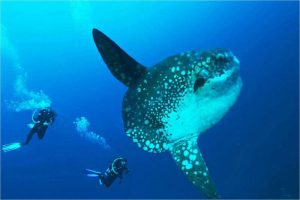 Yes, Mola Mola is one of the main stars among other marine lives in the underwater world of Bali aside the phenomenal, majestic manta rays. However, if you are thinking that Mola Mola is as graceful as the flying mantas, hold your breath.

As for how the National Geographic says it, this fish looks a lot like a big floating blob rather than your usual type of fish. In fact, it largely resembles an enormous head with two large fins at the top and bottom of its body, as if one-third of the body consists of the head—which abruptly ended in awkward, wavy tail. In fact, the German affectionately called it “Schwimmender Kopf”, literally translates as swimming head.

Mola mola itself is actually its scientific name. The fish belongs to genus Mola, a Latin word for millstone, perfectly describe the fish’s grey skin and big, round shape. Well, at least it sounds cute to say the name twice. Luckily, Mola Mola is widely known for its common name, Ocean Sunfish, which luckily is a little bit more… normal.

The name derived from its habit of basking in the sun, just above the ocean surface, to have seabirds pecking parasites on its skin. Their skin can be so infested with parasites, and having a school of small fishes and some birds brimming around it can really help Mola Mola to get rid of the pesky critters.

Mola mola is not just big—it’s gigantic and can weigh more than a car. While you may think that whale shark is the biggest fish, Mola mola actually earns the honor of being the largest boney fish the ocean. Mola mola can reach 8 – 14 feet in their adulthood, and weight up to 2.5 tons, as stated by National Geographic. Its diet consists of jellyfish, with alternatives of small fish, zooplankton, and algae.

Despite their large structure, however, this clumsy swimmer is actually friendly to their human guests. They even show interest and curiosity to divers, which maybe look like a thin, strange-looking fish to them.

Mola mola loves the warmth of tropical ocean, where the water is temperate and the sun is present all year long. You can find them in Galapagos, Spain, Italy, and especially, Nusa Penida, Bali. The latest is largely praised for the Crystal Bay diving sites, where the nutrient-rich waters and deep water trenches provide an excellent living environment to them. The site also beloved by the local Sunfish as their one-spot cleaning station. This means you are having high chance to spot on Mola Mola at this site.

However, the Ocean Sunfish is not spending each of its living days, drifting above the ocean water, absorbing the sun. Most of the time, it wanders at depth of 160 to 560 feet or deeper. To have the best chance of spotting Mola mola, come to Nusa Penida around July to November, known as Mola Mola season by the locals.

Do you want to meet this special, extraordinary massive Sunfish?