Flores Island tour rises as Indonesia’s next big thing. It’s the region where the ancient Komodo dragons still roams free in the wild. More than Komodo, Flores is almost a piece of another world that just been found. The azure blue sea, blushing pink shores, a village that stuck in the stone age, and its tumultuous rolling hills appear a little bit fictive. With its raw beauty, the island quickly draws attention from travellers who want to escape Bali. 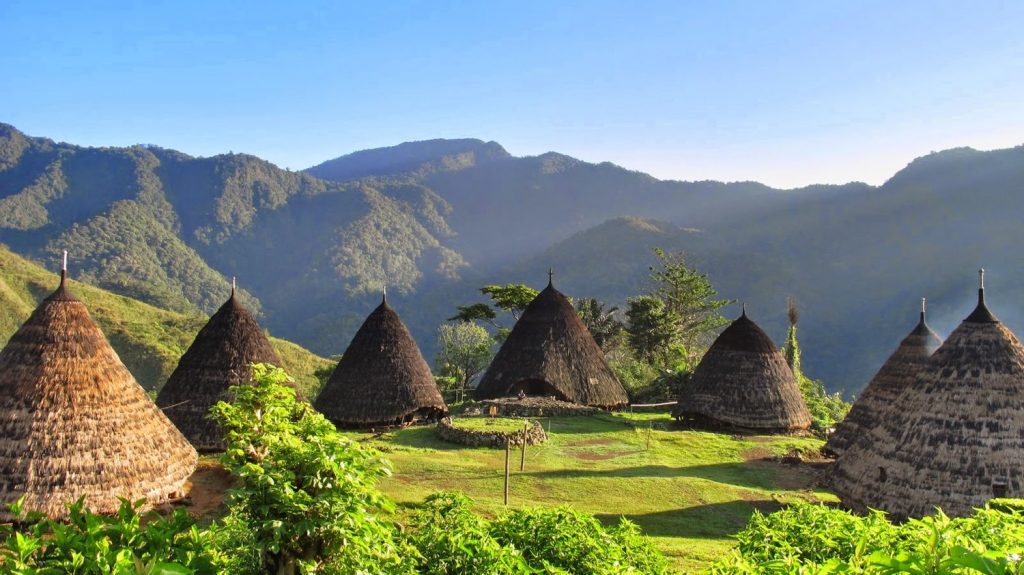 Many people flock to Flores only to stop by Labuan Bajo before sailing straight to Komodo Island and nearby. Many trip to Flores features island hopping, dragon hunting, and diving as the holiday highlight. However, you should not forget that the island of Flores itself hid many nature beauty that worth to explore. If you are planning to have Flores Island tour, do not miss these five awesome things. They will definitely make your day last forever.

Leave the brimming Labuan Bajo, head deeper to the interior of Flores. Take a wild adventure through he rolling hills deep valley, and cascading waterfalls. Allow yourself to embark on Nat Geo expedition on this Flores Island tour. Deep behind lush valley interior, hid a charming Cunca Rami waterfall. You need to flow a rutted muddy tracks through the jungle before reaching the waterfall. However, you will instantly rewarded by refreshing crystal clear waters below the waterfall to swim in.

Freshen up your Flores Island tour with a refreshing dip in a clear blue lake in the middle of a cave. Rangko Cave is one of the gem in Flores that’s still unknown by many. It’s a rocky ocean cavern just near Labuan Bajo. The cave feature natural pool filled up with crystal clear water. Arrays of sunlight pass though the cave, sitting up the pool with bright turquoise hue. Jump in the pristine lake and admire the clarity of the lake, the hanging stalagmites, and the cool water.

Dance with the Manggarai Tribe

Have you ever seen how the warrior dance? Cali dance is a cultural identity for the Manggarai Tribe in Flores. Melo village is one of the traditional village who can bring this cultural experience for you. The Caci dance is played out by two men, the warriors, who fight with each other. The dance involve swaying whips, shields, mask, and sticks. The dance is very lively with the sound of cheering spectators and ringing bell belt worn by warriors.

Go Back to the Stone Age in Bena Village

Away from modern civilisation and the creep of technologies, Bena Village stands against of time. Nestled right in the middle of two valleys, entering Bena is like entering a lost village. The village consist of two parallel rows of high thatched roofed house on each side of the settlement. In the centre of the village are remnant of megalithic era—a pair of shrines where the ancestors lie.

As one of the most famous traditional village in Flores, Wae Rebo is a must for any travellers. Tucked on a top of a hill, 1200 m high above the sea level, the villagers live in their ancient cone-shaped houses. Far from the maddening crowd and tourism, Wae Rebo enjoys simple life and serenity. Lush rolling green hills surrounds the village from all direction, lightened up by soft light of morning sun. With such serenity, Wae Rebo is the best place to wake up during your Flores island tour. Don’t forget to watch and buy their gorgeous traditional Ikat weaving!

Wandering to Flores, you will get astonished by numerous raw wonder of nature waiting on every corner. You can have your itineraries arranged neatly agencies, or tailor your Flores island tour destinations by your likings. Wish you a wonderful travel!